A FedEx executive must transform himself physically and emotionally to survive a crash landing on a deserted island.

Okay. This movie is Man vs Nature. No. Man vs Man (himself). No. Man vs Volleyball?? Maybe all three. What is this guy rambling about?

Maybe I lost my mind a bit while I was stuck on the island with Tom Hanks for two hours. Not to say it wasn’t an enjoyable two hours. It was. But watching this film really makes you start asking yourself “Could I survive being stranded on a deserted island?” “Could I live off of seafood and coconuts for an extended period of time?” “Could I start a fire without a lighter or a match?” Well, I know the answer to the last one cuz I learned how to do it in the Boy Scouts.

Now that my rambling is finally over, let’s get back to the movie. This is a great movie, but if you can only watch movies that are fast paced, this is not the movie for you. It has a very slow and deliberate pace that is key to the nature of the story. I like that about this movie. It's not in a hurry to get anywhere, so the time that it takes to establish the main character's plight is justified. Sometimes, I get tired pf today's fast-paced films that are all about having something exciting happen every five minutes. Occasionally, I prefer to just kick back and have the movie take me on a journey. As long as there's some kind of payoff, I usually don't mind the journey. In the case of "Cast Away", the payoff isn't that great, but the journey was highly entertaining.

I'm not giving anything away by referencing the fact that the main character "Chuck Noland" gets stranded on a deserted island. It's basically a modern day "Robinson Crusoe"...to some degree. The visuals on and around the island are breathtaking. From what I have ascertained, it looks like the island scenes were mostly shot in Fiji and the Philippines. Wow. Not sure about the Philippines, but I definitely need to add Fiji to my bucket list. As I've said in other reviews, the island really becomes an additional character in the story line...a pretty major character. Although the story is somewhat predictable in its very nature, the way that Tom Hanks portrays his character is highly entertaining. There's fear, desperation, loneliness, comedy, elation, hunger, thirst and so much more. And, Hanks (no surprise) delivers a spot on performance that earned him an Oscar nomination (although he did not leave with the statue). I've been watching Hanks since he was an overactor on "Bosom Buddies" back in the 80s. He's come a long way with his acting, becoming one of the most endearing leading men in Hollywood.

If you have the patience to let a story unfold over the course of 2+ hours, then you should give this film a shot. I found it to be a rewarding experience in a number of ways. It's not a movie that I re-watch on a regular basis, but certainly one of my favorites and I make sure to watch it at least once a decade. I hope you'll give it a shot. 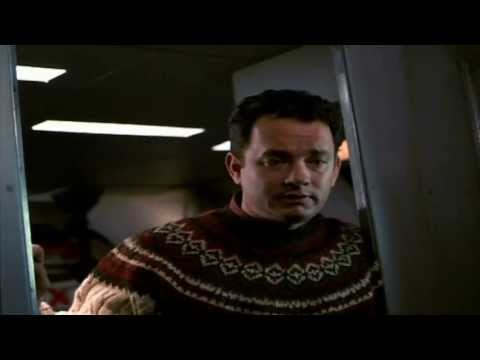